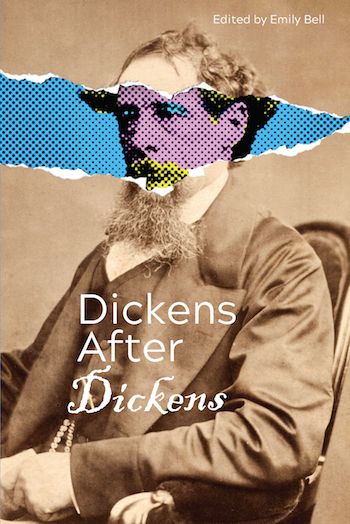 Please note: you can download the full ebook using the above buttons, or download individual chapters using the dropdown menu below.
Read online or download: free
Purchase price for print volume (including shipping and handling fees): £23.93
Additional local taxes may be added to EU orders at point of delivery.

We have a long way to travel before we get back to what Dickens meant…
—G.K. Chesterton, Charles Dickens

The 20th and 21st centuries have continued the quest, so aptly described by G. K. Chesterton in 1906, to ‘find’ Charles Dickens and recapture the characteristically Dickensian. From research attempting to classify and categorise the nature of his popularity to a century of film adaptations, Dickens’s legacy encompasses an array of conventional and innovative forms.

Dickens After Dickens includes chapters from rising and leading scholars in the field, offering creative and varied discussion of the continued and evolving influence of Dickens and the nature of his legacy across the 19th, 20th and 21st centuries. Its chapters show the surprising resonances that Dickens has had and continues to have, arguing that the author’s impact can be seen in mainstream cultural phenomena such as HBO’s TV series The Wire and Donna Tartt’s novel The Goldfinch, as well as in diverse areas such as Norwegian literature, video games and neo-Victorian fiction. It discusses Dickens as a biographical figure, an intertextual moment, and a medium through which to explore contemporary concerns around gender and representation.

The new research represented in this book brings together a range of methodologies, approaches and sources, offering an accessible and engaging re-evaluation that will be of interest to scholars of Dickens, Victorian fiction, adaptation, and cultural history, and to teachers, students, and general readers interested in the ways in which we continue to read and be influenced by the author’s work.

This collection is edited by Dr Emily Bell (Loughborough University) with a Foreword by Professor Juliet John (Royal Holloway, University of London), author of Dickens and Mass Culture (OUP). Dr Bell is a board member for the Oxford Dickens series and an editor for the Dickens Letters Project. She also acted as the first Communications Committee Chair of the international Dickens Society, and has published on Dickens, life writing and commemoration.

Readers can also download and cite from the PDF version of this book. This has a specific DOI and has a fixed structure with page numbers. Guidance on citing from other ebook versions without stable page numbers (Kindle, EPUB etc.) is now usually offered within style guidance (e.g. by the MLA style guide, The Chicago Manual of Style etc.) so please check the information offered on this by the referencing style you use.