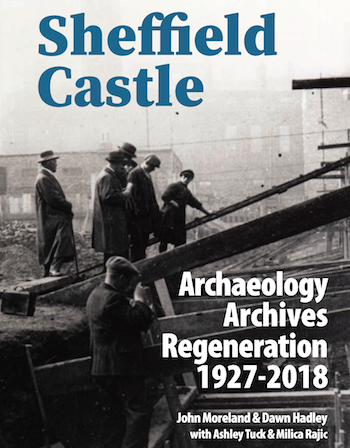 Please note: these ebook files are very large. Users downloading to mobile devices, or with an internet connection with limited bandwidth, should view and download chapters individually using the dropdown menu below.

Sheffield Castle presents an original perspective on an urban castle, resurrecting from museum archives a building that once made Sheffield a nexus of power in medieval England, its lords playing important roles in local, national, and international affairs. Although largely demolished at the end of the English Civil War, the castle has left an enduring physical and civic legacy, and continues to exert a powerful sway over the present townscape, and future development, of Sheffield.

In this volume, we rediscover the medieval castle, explore its afterlife, and discuss its legacy for the regeneration of Sheffield into the twenty-first century. The authors bring to publication for the first time all the major excavations on the site, present the first modern study of artefacts excavated in the mid-twentieth century, and situate both in the context of the published and unpublished documentary record. They also tell the stories of those responsible for re-discovering the castle, the circumstances in which they were working, their archaeological methods, and the scholarly and political influences that shaped their narratives.

In setting the study within the context of urban regeneration, Sheffield Castle differs from most publications of medieval castles. This regeneration narrative is both historical, addressing the ways in which successive building campaigns have encountered the castle remains, and current, as the future of the site is under active discussion following the demolition of the market hall built on the site in the 1960s. The book explores how the former existence of the castle, and the landscape in which it sat, including its deer park, have shaped the development of the ‘Steel City’. We see that the untapped heritage of the site has considerable value for the regeneration of what may now be one of the most deprived areas of Sheffield, but was once at its social, political and cultural heart.

Prof John Moreland (University of Sheffield) and Prof Dawn Hadley (now University of York) led the University of Sheffield’s Sheffield Castle project, and worked with colleagues from Wessex Archaeology, Museums Sheffield and the contributors named below. This volume, written with Ashley Tuck and Milica Rajic from Wessex Archaeology, presents the culmination of the findings of this project and is, importantly, accompanied by a digital archive (https://doi.org/10.5284/1074899), making all the research materials publicly available.